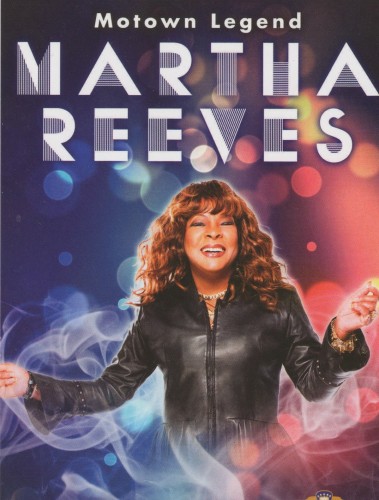 NYC & Washington D.C. (January 22, 2014) – Martha Reeves, a Motown Legend and proud member of Sigma Gamma Rho Sorority, first hit the charts with the Vandellas in 1963, and she hasn’t slowed down since. With a catalog of hits that includes party favorites “(Love Is Like a) Heat Wave,” “Nowhere to Run,” “Jimmy Mack” and “Dancing in the Street,” Reeves has been called the Queen of Motown and has worked with everyone from Marvin Gaye and James Brown to Bruce Springsteen, Beverly Sills and Rance Allen. Now some 50 years into her incredible career, Reeves is still touring full-time, earning rave reviews for her unforgettable live shows.

Whether on or off-stage, Soror Martha Reeves zeroes in on matters that are important to the effective building and oftentimes re-building of communities. From gala fundraisers to testifying for artists’ rights and to serving on the Detroit City Council Soror Martha Reeves is determined to make a difference in the lives of people.To that end and as a result, she was inducted into the sisterhood in 2008. She and the sisterhood intend continued efforts to ensure the betterment of the community-at-large.

For more information about Sigma Gamma Rho Sorority, contact Soror Adrienne Unae. She is a dancer, singer and actor, a 501©3 production company and the Public Relations Officer for the Northeastern Region of Sigma Gamma Rho Sorority. She has historically used theatre and dance to foster enhancement of social, life, impulse control and anger management skills to “underserved” and “at risk” youth and women in various parts of the world. She, Martha Reeves and Sigma Gamma Rho Sorority look forward to seeing you this weekend.